Among Us is a highly popular game that people all over the world talk about. This game is simple; it is about strategy and deception. It is similar to the game Mafia.

In short, there is a group of people working as “crewmates.” Their goal is to finish all of the tasks and not get killed by the “imposters.” Generally, there are 1-3 imposters a game. Their goal is to kill the crewmates and sabotage tasks while appearing to be like any other crewmate. Crewmates can find dead bodies and report them, initiating a voting process. During this time, players can discuss and vote who they should vote out or “eject.” This multiplayer game has people hooked!

Among Us was created in 2018 by Innersloth. Within the past six months, it has skyrocketed in the amount of users to more than 85 million players. Among Us is now being called “the game of 2020” and to some users, it is 2020. Many players are uncovering that this game resembles the current year. This year has been riddled with deception, constant worry, and the importance of communication and how sometimes that can be abused. Tension that this game holds stays until the very end. This game allows friends to play together fostering playful tension and a reason to laugh and have fun.

Nintendo  announced in early October that one new Smash Bros. character would be added to its roster for $5.99. The new characters turned out to be Steve from Minecraft. Minecraft by Mojang Studios has been a highly popular game since its introduction in 2009 and continues its trend today. As of October 13th, 2020,  Steve has finally crossed over to Nintendo to be the new character in Super Smash Bros. Both games individually have had a colorful history behind them. Evolving over the year, the first Smash bros was introduced in 1999, It was called Smash 64. Then came the Game Cube’s Super Smash Melee. Seven years later Wii’s version of the game came out and it was called Super Smash Bros Brawl.

It’s interesting that a game, Minecraft, from a different generation and player platform, Linux, Windows, OS X,  joins the Switch’s Smash universe. Smash is about Nintendo characters brawling it out, now with the addition of Steve to the game their universe has breached over to a different realm. It’s about to get good! 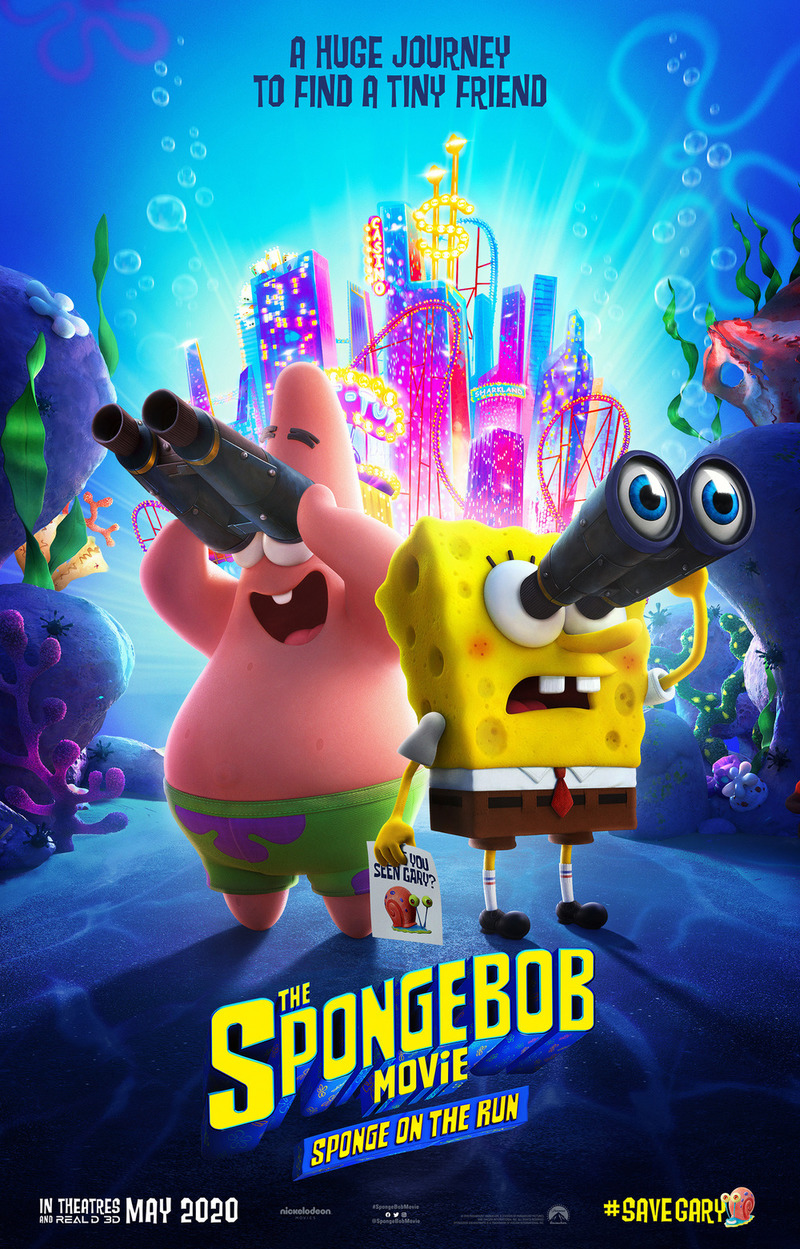 Who lives in a Pineapple under the sea?

Spongebob Squarepants, that’s who! He is the loveable, yellow square many generations know.  It is a show about a sponge whose only goal is to be the best fry cook in all of Bikini Bottom. He and his best friend, Patrick Star, go on many weird and unnecessary adventures like jellyfishing, trying to befriend Squidward, or fending off arch nemesis Plankton.

After several successful seasons, Spongebob was yet-again readay to star in his third genuine, interesting and  funny movie that all generations can enjoy. In July of 2020 Nickelodeon introduced “The Spongebob Movie: Sponge on the Run.” A new high budget movie that will spark the lovely feeling of childhood wonder and will bring families closer together in a warm, peaceful way. A long-time watcher and an even more long time lover would fall prey to this movie’s alluring presence.

I won’t spoil the plot for you, but SpongeBob and Patrick travel to the lost city of Atlantic City to solve the mysterious kidnapping of Gary the snail. They soon prove that there’s nothing stronger than the power of friendship as they encounter danger and delight at every turn. “Oops, looks like I gave you the edge on this little adventure, nothing else to do except watch the Movie via HBO live and get to watchin’ it”!

The Skywalker Saga: Delayed for 2021

Fans will have to wait a bit longer to play Lego Star Wars the Skywalker Saga. It was originally planned to come out in October of 2020 but has been delayed due to more preparations needed. No official reason has come out for the game’s delay. The Skywalker Saga game trailer came out in the beginning of 2020. Many think the game was delayed due to of Covid-19, which has angered many people. Traveller’s Tail, the game’s developers, promised the game would be released in October of 2020. Their most recent tweet, however, said they were going to delay the game until spring of 2021.  Not only did many games go on the wait list, many movies and tv shows have been added as well. The original release date has been deleted from the official Lego site and replaced with a new one. It may be delayed but it can still be pre-ordered on Nintendo Switch, Ps4 or Xbox. A splash page for the game revealed a 2021 release date, confirming the game will, in fact, be delayed but also accompanied by a sure date.

End of the Simpsons

As the clouds roll by, a mysterious logo comes closer. A choir in perfect harmony utters: “The Simpsons.” We fly overhead passing a nuclear power plant and Semi-Painless Dentistry, as it fades into Springfield Elementary School. In a window, we see a deformed-looking child writing; “I will not skateboard in the halls” many times over. Once the school bell rings, his eyes light up, and he is immediately out of the school on his skateboard. As soon as he hits the sidewalk, it shows an equally deformed man in a hazmat suit, readily leaving work, but fails to see the rod of plutonium in his shirt. It then transitions into a mother doing groceries as her baby is placed into the food bag. She pops her head out as the mother lets out a sigh of relief. It cuts to a little girl playing the saxophone evidently passionate about jazz, but she is sent out for doing so. It transitions to the man driving his car and tossing out the rod of plutonium, only to be caught by the same boy riding down the street on his skateboard. It seems as if the same baby, as previously mentioned, is driving a car, but as it zooms out, her mother is the one actually driving, the baby only mimicking her mother. The boy on the skateboard, the man in the hazmat, and the mother and her baby meet and cram each other on the same couch, eventually breaking it. The iconic Simpsons theme song plays, beginning the episode.

Now imagine that won’t happen anymore. The Simpsons is finally ending after 30 years, according to the show’s composer Danny Elfman. “Fox has renewed the cartoon for two more series, which will see new episodes until 2021,” but Danny has heard that “The Simpsons is in its final year.” It is a true shame to all three generations that this show has united together for the better.

The Umbrella Academy is a superhero tv series that originates as a comic book series. It revolves around a family of estranged children who reunite to solve a mystery surrounding their father’s death, while also protect the world from ending in the process. The story began on October 1, 1989. Forty-three women around the world gave birth, none of which were pregnant the previous day. The lives of seven children were changed when Sir Reginal Hargeeves adopted and turned them into superheroes, all of which had different powers. With zero interest in parenting, Mr. Hargeeves named them in terms of usefulness:

Number 3 can manipulate the mind.

Number 4 can speak to the dead.

Number 5  can space and time travel.

Number 6 can summon a tentacle monster.

Number 7 can convert sound into destructive force, although thought to have no special abilities at all.

The Umbrella Academy has proved to be a great show, conjuring up nearly 45 million views within the first month of release. It has also been given a seat on Netflix’s top 10 trending list. If you are interested in an exhilarating adventure series, this is one to put on your watchlist.

There is so much more I wish I could tell you right now about just how good The Umbrella Academy Season 2 is over the course of its 10 new episodes. There is so much to touch on, including the incredible needle drops, the costume design, the rip-roaring banter between seven siblings trying to save the world from an apocalyptic event (again), the surprise plot twists which will have you flipping out or inconsolable, or just how good it feels to have a show firing on all cylinders as it welcomes you into its wild and weird world with open arms.”

There has been recent news that the multinational company, Apple, has gotten into a grudge with Epic, a video game and software developer most famous for its video game, Fortnite.

The problem between these two companies began on August 13 when Epic added a direct payment mechanism, violating Apple’s rules. In return, Apple has taken Fortnite off the apple store. Users will not be able to update their mobile game from now on nor can they cross-play. Fortnite has been available on the mobile community since season 4. From there, it has come a long way, and it is sad to see it leave. As of now, it can only be accessed on the following: Ps4, Xbox, and the Nintendo Switch.

Fortnite returning to the Apple store is said to be in Epic’s hands. They have been informed that in order to return to the store, they must “comply with App Store guidelines,” meaning returning to the previous payment policy where Apple would receive the payments instead. Although this could be an easy fix to this feud, Epic is countering saying, “Software makers have the right to freely express their ideas and to compete in a fair marketplace. Apple’s policies take these freedoms away.”Judge Yvonne Gonzalez Rogers takes the people’s side: “Epic Games and Apple are at liberty to litigate against each other, but their dispute should not create havoc to bystanders.” The current predicament appears of its own making,” Rogers wrote, saying that Epic “strategically chose to breach its agreements with Apple” and thus disturb the status quo. What will happen to these two companies, we will soon find out.